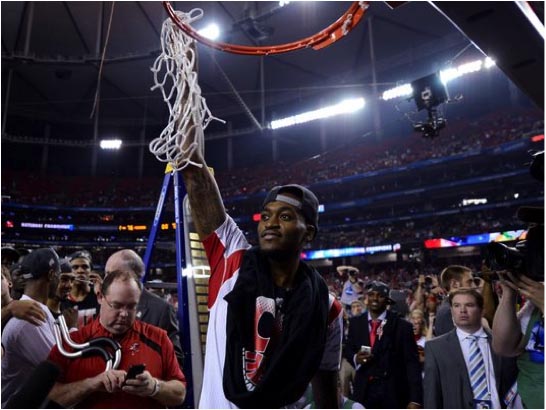 If hearing the name Kevin Ware doesn’t make you automatically cringe, then you probably aren’t familiar with what happened to the Louisville basketball player on March 31st, 2013. In the first half of the Elite 8 round of the March Madness College Basketball Tournament, Kevin Ware landed awkwardly after attempting to block a three-point shot attempt by Duke Guard Tyler Thornton. He suffered a compound fracture to his right leg, which protruded several inches out of his shin. Dr. Warkala was saddened when he saw what happened to Ware “I knew how devastating the injury could be physically and how much dedication and focus it was going to take to come back from that drastic injury”

After being tended to courtside for several minutes, Ware was carried off on a stretcher and was taken by ambulance to the nearest hospital. Surgeons inserted a rod into his tibia in a two-hour operation. As Ware started on his long journey of recovery to accomplish the ultimate goal of getting back on the court, most people were curious if the Louisville Guard would be able to ever play the game he has loved ever since he was a little boy. Ware’s surgery was considered successful by the surgeons that operated on him, he had an increased risk of developing a number of potentially life-threatening conditions.

An infection was the most immediate risk. Any open wound, as in the case of a compound fracture, runs the risk of being contaminated by bacteria outside the body and spreading within. Deep vein thrombosis, or DVT, is a condition in which one of the deep veins in the limb develops a blood clot that may partially or completely block blood flow from the affected area. If left unchecked, the clot can turn into an embolus (a traveling clot) and lodge in the lungs causing a pulmonary embolism and resulting in potential death.

The last on this list is compartment syndrome. This syndrome is characterized by pressure build up in an enclosed space to dangerously high levels preventing blood flow to and from the affected limb. Without proper blood exchange, soft tissue, blood vessels and nerves can be severely damaged. The treatment for such a condition is immediate fasciotomy, a surgical procedure where an incision is made above the area to alleviate the pressure that is preventing proper circulation to the surrounding tissue. Dr. Oware said that “Although Ware has a long road to being able to play again I was confident he would make a full recovery”.

An unfortunate accident for such a young, aspiring athlete is difficult to swallow. The silver lining of this scary injury is that Louisville went on to win the 2013 National Championship and Ware was there to cut the net down. Ware decided to make his basketball return at Georgia State and now is playing in a Czech professional basketball club based in the city of Brno. Now, this injury is very unlikely to happen to you if you’re just an average sports fan, but in the case of an injury, Cornerstone Foot & Ankle would take excellent care in these traumatic injuries.